Now, Try to Imagine Living in a World where Evil is Stronger than it is Now …

… Where the majority opinion and population thought and acted  like Dr. Mengele (see below). Where the leadership of a Nation exalted and celebrated the Works of men like Dr. Mengele and His breed. Imagine trying to protect your innocent children from such an evil presence. Imagine, how will you get justice for all the evil being down, by those you have given free will.

Maybe now you can picture how difficult a position God is in who wants to show mercy, but will have choose to enforce justice on the account that the majority have rejected His Salvation. God sent only One man into All the history of the World to shoulder the sins of the world upon his back. Only one man could perform this monumental feat. And Even that Man had to choose to willingly and willfully do it, but not from his own strength, but out of His own Love for His Father, (because He didn’t want to do it out of his own natural instincts, and possibly not even out of love for His fellow man). He asked His Father to let the Cup pass from Him–three times.

If Yeshua (“Salvation”) would have sinned even one time, he would have disquailified himself from becoming an acceptable sacrifice for our sins and the Salvation for the whole World, and would have damned  himself to eternity in hell, suffering the just wrath of God for Sinning against His Law.

Thankfully, Yeshua passed His Testings: He got straight A’s on his Trials, Hardships, Temptations, and Tribulations that assailed Him during His three and a half years of ministry upon the Earth. And He left us with a perfect example to follow and obey. HIs work was finished on the Cross, when He cried out. “It is finished!” Thus, passing the baton on to you and me. Now it is our turn.

We are now the Witness of God upon the Earth, called out to Pray “His Kingdom Come, His Will be Done, on Earth as it is in Heaven!” Then we are called to be the actual answers to our own prayers–faithfully exposing and destroying the works of Satan and Men, like Dr. Mengele, in our own day. How are we doing?

Do you know that same spirit, the same tactics, the same lies that allowed Dr. Mengele to perform his experiments on innocent children and then kill them are just as alive and well today, and advancing and prospering in every state in the United States?

How does Nazi Germany’s death toll of 6 million Jews, compare to America’s 50 million innocent deaths. We are 8.3 times more successful that Hitler in destroying and killing our own innocent citizens of America. Of course, I am speaking about the Modern Mengele Society–Planned Parenthood, which is taking full advantage of the thoroughly wicked political environment in our land. But that is another story.

As you read below make a special note of How Dr. Mengele got his patients to trust him, even be fond of him, before he Mengeled them. How he was kind, sweet, even giving them candy and treats. Isn’t that exactly the training of Planned Parenthood? And that raises the question: What have you and I done to stop the killing of innocent children in our nation? Remember the Goats? Just food for thought.

Mengele used Auschwitz as an opportunity to continue his anthropological studies and research into heredity, using inmates for human experimentation.[3] His medical procedures showed no consideration for the victims’ health, safety, or physical and emotional suffering.[3][4] He was particularly interested in identical twins, people with heterochromia iridum(eyes of two different colors), dwarfs, and people with physical abnormalities.[3] A grant was provided by the Deutsche Forschungsgemeinschaft (‘German Research Foundation’), at the request of Von Verschuer, who received regular reports and shipments of specimens from Mengele. The grant was used to build a pathology laboratory attached to Crematorium II at Auschwitz II-Birkenau. [39] Miklós Nyiszli, a Hungarian Jewish pathologist who arrived in Auschwitz on 29 May 1944, performed dissections and prepared specimens for shipment in this laboratory.[40] The twin research was in part intended to prove the supremacy of heredity over the environment and thus strengthen the Nazi premise of the genetic superiority of the Aryan race.[41] Nyiszli and others reported that the twin studies may also have been motivated by an intention to increase the reproduction rate of the German race by improving the chances of racially desirable people having twins.[42]

Mengele’s research subjects were better fed and housed than the other prisoners, and temporarily spared from execution in the gas chambers.[43] His research subjects lived in their own barracks, where they were provided with a marginally better quality of food and somewhat improved living conditions than the other areas of the camp.[44] When visiting his young subjects, he introduced himself as “Uncle Mengele” and offered them sweets,[45] while at the same time being personally responsible for the deaths of an unknown number of victims whom he killed via lethal injection, shootings, beatings, and his deadly experiments.[46] In his 1986 book, Lifton describes Mengele as sadistic, lacking empathy, and extremely antisemitic, believing the Jews should be eliminated as an inferior and dangerous race.[47] Rolf Mengele later claimed that his father had shown no remorse for his wartime activities.[48]

He was capable of being so kind to the children, to have them become fond of him, to bring them sugar, to think of small details in their daily lives, and to do things we would genuinely admire … And then, next to that, … the crematoria smoke, and these children, tomorrow or in a half-hour, he is going to send them there. Well, that is where the anomaly lay.[49] 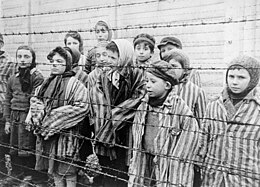 Jewish twins kept alive in Auschwitz for use in Mengele’s medical experiments. The Red Army liberated these children in January 1945.

Twins were subjected to weekly examinations and measurements of their physical attributes by Mengele or one of his assistants.[50] The experiments he performed on twins included unnecessary amputation of limbs, intentionally infecting one twin with typhus or some other disease, and transfusing the blood of one twin into the other. Many of the victims died while undergoing these procedures,[51] and those who survived the experiments were sometimes killed and their bodies dissected once Mengele had no further use for them.[52] Nyiszli recalled one occasion on which Mengele personally killed fourteen twins in one night by injecting their hearts with chloroform.[32] If one twin died from disease, he would kill the other twin to allow comparative post-mortem reports to be produced for research purposes.[53]

Mengele’s eye experiments included attempts to change the eye color by injecting chemicals into the eyes of living subjects, and he killed people with heterochromatic eyes so that the eyes could be removed and sent to Berlin for study.[54] His experiments on dwarfs and people with physical abnormalities included taking physical measurements, drawing blood, extracting healthy teeth, and treatment with unnecessary drugs and X-rays.[4] Many of his victims were dispatched to the gas chambers after about two weeks, and their skeletons were sent to Berlin for further analysis.[55] Mengele sought out pregnant women, on whom he would perform experiments before sending them to the gas chambers.[56] Alex Dekel, a survivor, reports witnessing Mengele performing vivisection without anesthesia, removing hearts and stomachs of victims.[57] Yitzhak Ganon, another survivor, reported in 2009 how Mengele removed his kidney without anesthesia. He was forced to return to work without painkillers.[58] Witness Vera Alexander described how Mengele sewed two Romani twins together, back to back, in a crude attempt to create conjoined twins;[51] both children died of gangrene after several days of suffering.[59]

And that is only a few examples of what people witnessed or were allowed to witness. We have no idea to the extent of the depravity of what such a mind of evil and science could achieve.

And to be simple and basic. There is nothing we can do. We cannot stop such depraved evil on a some grand scale, except by the power and calling of God (See the TWO END TIME WITNESSES.) But what we can do, is what we should do, and what we must do is to obey God’s Command.

By doing what God Commanded the Early Church We become Children of God. And it is His Gospel that Changes Men’s Hearts, and delivers them from the Demonic Oppressions, Lies, Evil, Addictions, and all their wickedness and rebellion to God.

In this way we bring down the Towers of Darkness, one soul at a time.

We put leaven into the dough and kneed it until it leavens the whole Lump.

Once we have done our part, and completed the Work Predestined for us to do, then we head Home Eternally, or He comes back, and Sets up His Kingdom, either way we win.

Sharing the Message of Life.

Where do the laws of nature come from? (ie. gravity, light, sound, etc.)