This evidence of this historical record has been known for centuries, but suppressed, and never rightfully been acknowledged, nor repented of … it has been strategically avoided, down played, side stepped, made excuses for, justified, dodged and diverted. This history is not all in the distant past. Some of it has happened in my and my father’s lifetime. This tells us one thing. This history is going to happen again. History is going to repeat itself, once again when all the conditions are right for it. In due season: the tree is going to reproduce its fruit. Guaranteed.

In Daniel we read that one of the characteristics of the Antichrist is that it would wear out the saints of the Most High:

The Papacy has a long history of “wearing out” the saints of the Most High. Below is a timeline of the generally aggressive history of the Roman Catholic Church, but the most tragic one that concerns the Word of God is the persecution during the Middle Ages of anyone daring to oppose the Church. The Bible predicts that the saints of the Most High would be persecuted for 1260 years.

Historian J. A. Wylie said this:

It is idle in Rome to say, “I gave you the Bible, and therefore you must believe in me before you can believe in it.” The facts…conclusively dispose of this claim. Rome did not give us the Bible—she did all in her power to keep it form us; she retained it under the seal of a dead language; and when others broke that seal, and threw open its pages to all, she stood over the book, and unsheathing her fiery sword, would permit none to read the message of life, save at the peril of eternal anathema” (emphasis in original).i

During these years of oppression in which the masses were kept in ignorance and the priest held sway over every aspect of life, here and there arose individuals willing to shine a light into the darkness. Dave Hunt tells us that because they rejected transubstantiation, “Christians were burned at the stake by Roman Catholics by the hundreds of thousands.”ii

In 1940, French statesman Baron DePonnat stated, “Roman Catholicism was born in blood, has wallowed in blood, and has quenched its thirst in blood, and it is in letters of blood that its true history is written.” Indeed, the history of papal Rome has been one of brutal torture, slaughter, and mass murder. Read more quotes confirming the Papacy’s violent history

1096 Roman Catholic crusaders slaughter half the Jews in Worms, Germany.

1098 Roman Catholic crusaders slaughter almost all of the inhabitants of the city of Antioch.

[This is the City the preserved the Word of God and gave us the Textus Recepticus, The Received Greek Manuscript (the Trusted One) of the New Testament. Not the corrupted Text of Alexandria. This is the City that Sent out Paul and Barnabas on their first Missionary Journey, and Paul and Silas on his second Missionary Journey. This was the sending Church, the highest model of a righteous church in the History of the New Testament. No wonder it was so hated by Satan, to be attacked and slaughtered by Satan’s Demonic Army filled with Evil, Lies, Murder, Rape, Mayhem, and Damnable Violence. You can tell a tree by its Fruit.]

1099 Roman Catholic crusaders massacre 70,000 Muslims and Jews [who were far more righteous than themselves] when they capture Jerusalem.

1208 – 1226 The Albigensian Crusades in southern France. Roman Catholic crusaders slaughter approximately 20,000 citizens of Beziers, France, on July 22, 1209. Albigensian Christians and Catholics were slain. By the time the Roman Catholic armies finished their “crusade,” almost the entire population of southern France (mostly Albigensian Christians) has been exterminated. During the six centuries of papal Inquisition that began in the 13th century, up to 50 million people were killed. Read what J. A. Wylie’s The History of Protestantism has to say about the Crusades against the Abigenses

1243 Roman Catholic mobs burn alive all the Jews in Berlitz, Germany (near Berlin).

1348 – 1349 The Jews are blamed for the bubonic plague. Author Dave Hunt tells us, “Accused of causing the ‘Black Death’ Jews were rounded up [by Roman Catholic mobs] and hanged, burned, and drowned by the thousands in revenge.”

1389 Roman Catholic mobs murder 3000 Jews in Prague when they refuse to be baptized.

1481 – 1483 At the direction of the Roman Catholic inquisitors, authorities burn at the stake at least 2000 people during the first two years of the Spanish Inquisition.

1553 – 1558 Roman Catholic Queen Mary I of England (aka “bloody Mary”) attempts to bring England back under the yoke of papal tyranny. During her reign, approximately 200 men and woman are burned to death at the sake. Her victims include bishops, scholars, and other Protestant leaders. 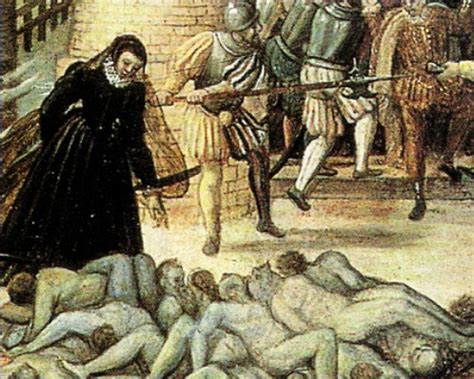 1572 St. Bartholomew’s Day Massacre. French Roman Catholic soldiers begin killing Protestants in Paris on the night of August 24, 1572. The soldiers kill at least 10,000 Protestants during the first three days. At least 8000 more Protestants are killed as the slaughter spreads to the countryside.

1618 – 1648 The Thirty Years’ War. This bloody, religious war is planned, instigated, and orchestrated by the Roman Catholic Jesuit order and its agents in an attempt to exterminate all the Protestants in Europe. Many countries in central Europe lose up to half their population.

Circa 1938 –  1945 Catholic dictators such as Adolf Hitler and Monsignor Tiso slaughter approximately six million Jews in Europe prior to and during World War 2.

[Jozef Gašpar Tiso (Slovak pronunciation: [ˈjɔzef ˈtisɔ]; Hungarian: Tiszó József; 13 October 1887 – 18 April 1947) was a Slovak politician and Roman Catholic priest who served as president of the Slovak Republic, a client state of Nazi Germany during World War II, from 1939 to 1945. In 1947, after the war, he was executed for war crimes and crimes against humanity in Bratislava. Born in 1887 to Slovak parents in Nagybiccse (today Bytča), then part of Hungary, Austria-Hungary.]

[Mussolini ordered the removal of Bedouins from Libya and their internment in concentration camps, he also ordered attacks on refugee columns. Mussolini was also responsible for the crimes in Ethiopia which included the use of chemical weapons such as mustard gas, the use of concentration camps in counter-insurgency, and attacks on Red Cross facilities. According to the Ethiopian government, 382,800 civilian deaths were directly attributable to the Italian invasion. 17,800 women and children killed by bombing, 30,000 people were killed in the massacre of February 1937, 35,000 people died in concentration camps, and 300,000 people died of privations due to the destruction of their villages and farms. The Ethiopian government also claimed that the Italians destroyed 2,000 churches and 525,000 houses, while confiscating or slaughtering 6 million cattle, 7 million sheep and goats, and 1.7 million horses, mules, and camels, leading to the latter deaths. During the 1936–1941 Italian occupation, atrocities also occurred; in the February 1937 Yekatit 12 massacres as many as 30,000 Ethiopians may have been killed and many more imprisoned as a reprisal for the attempted assassination of Viceroy Rodolfo Graziani. Thousands of Ethiopians also died in concentration camps such as Danane and Nocra.]

1941 – 1945 The Roman Catholic Ustashi in the fascist state of Croatia butcher up to one million Serbian Orthodox Christians. Roman Catholic killer squads are often led by Franciscan priests, monks, and friars. This genocide is choreographed by two Jesuit prelates: Aloysius Stepinac and Ivan Saric.

Sharing the Message of Life.

Where do the laws of nature come from? (ie. gravity, light, sound, etc.)